Italian side Salernitana are in talks to sign 20-year-old midfielder Pape Matar Sarr on loan from Tottenham following a breakthrough week in north London for the young Senegal international. Sarr returned to Hotspur Way early following his involvement at the World Cup in Qatar so he could work closely with Antonio Conte and his coaching staff before the Premier League returned on Boxing Day.

Now Sarr is reaping the rewards of his exemplary attitude after making back-to-back substitute appearances against Aston Villa and Crystal Palace in a rollercoaster start to 2023 for Tottenham. 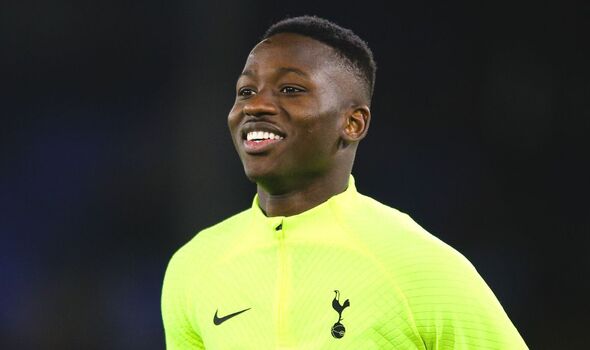 After the 4-0 win at Selhurst Park, Conte had declared he wanted to keep both Sarr and Bryan Gil at the club this winter as opposed to sending the highly-rated pair out on loan.

“We exploited the period of the World Cup to work with these young players to improve themselves under the tactical aspect and physical aspect,” the Italian said after his side ran riot in south east London.

Now his loan verdict will be put to the test after Salernitana sporting director Morgan De Sanctis confirmed his side’s plan to land Sarr from Spurs until the end of the season.

“Sarr is the kind of player we need, he has the skills we want in that position,” the former Italian goalkeeper declared.

Tottenham are expected to hand Sarr a starting berth this Saturday when Portsmouth travel to the capital in the FA Cup third round.

AC Milan and Sevilla have also previously shown interest in the talented midfielder, who has had to bide his time to make his mark under Conte.

But now his quality is beginning to shine through and with Spurs enduring a difficult season, Sarr is the kind of solution that could help them stay on track this term.

It is currently unclear whether Spurs are prepared to loan the youngster given Conte has made it clear he thinks the best outcome is for Sarr to stay this month.

Cristian Stellini was full of praise for the former Metz prospect in his pre-FA Cup press conference, making it clear he is held in high regard at Tottenham.

“He’s a very young player. It’s the first time he came to England. He has one year experience in Ligue 1 in France,” Stelleni said. “About his skill, he can do everything because he’s a great player with many possibilities. He’s a midfielder who can play in many positions. He’s a talented player.

“I spoke at my last press conference about the way you have to wait with young players. If you use young players at the wrong time, you can make a mistake. But with Pape, Antonio decided at this moment that Pape is ready and he improved a lot in training.

“We worked a lot on body position and many skills he has to improve. He showed a desire to improve and this is very important for us. If you work with a player and they show this desire it’s easier. With Pape it is easy.

“He has to continue to work because we have a hierarchy, so he has to respect this and we have to respect the players. He has the possibility now and he has to show his desire and his quality.”

Spurs intend to continue signing young players for the future as part of their transfer strategy moving forward.